The Headship Order is Not to be Mocked 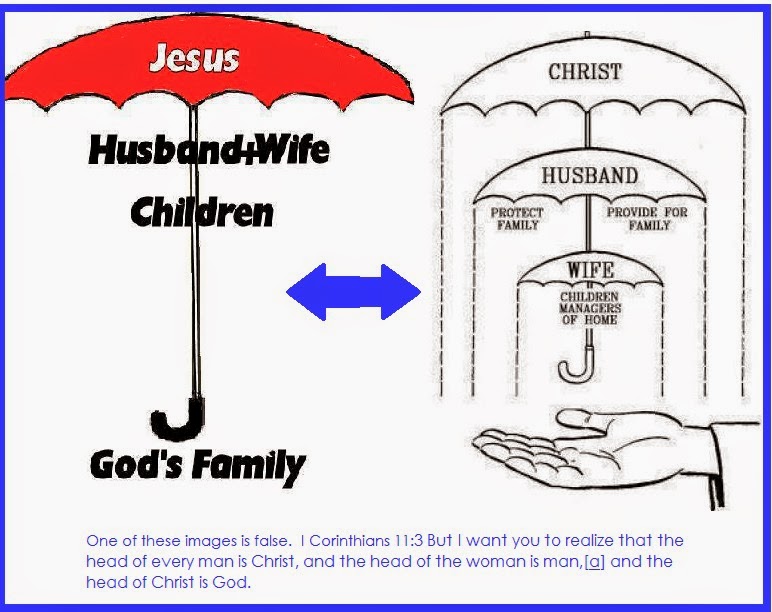 A while back I made this picture in correction to one I had seen online.  There were two versions of the same umbrella concept floating about facebook land.  Which is correct?

Read I Corinthians 11: 1-16
1Be ye followers of me, even as I also am of Christ.
2 Now I praise you, brethren, that ye remember me in all things, and keep the ordinances, as I delivered them to you.
3 But I would have you know, that the head of every man is Christ; and the head of the woman is the man; and the head of Christ is God.
4 Every man praying or prophesying, having his head covered, dishonoureth his head.
5 But every woman that prayeth or prophesieth with her head uncovered dishonoureth her head: for that is even all one as if she were shaven.
6 For if the woman be not covered, let her also be shorn: but if it be a shame for a woman to be shorn or shaven, let her be covered.
7 For a man indeed ought not to cover his head, forasmuch as he is the image and glory of God: but the woman is the glory of the man.
8 For the man is not of the woman: but the woman of the man.
9 Neither was the man created for the woman; but the woman for the man.
10 For this cause ought the woman to have power on her head because of the angels.
11 Nevertheless neither is the man without the woman, neither the woman without the man, in the Lord.
12 For as the woman is of the man, even so is the man also by the woman; but all things of God.
13 Judge in yourselves: is it comely that a woman pray unto God uncovered?
14 Doth not even nature itself teach you, that, if a man have long hair, it is a shame unto him?
15 But if a woman have long hair, it is a glory to her: for her hair is given her for a covering.
16 But if any man seem to be contentious, we have no such custom, neither the churches of God.

This passage covers the "Headship Order".  It is primarily where the Christian Headcovering (or veiling) stuff comes from.  The veil aside, the root of the passage is the headship order.  God, Christ, Husband, Wife.  It is a chain of command.  It is structure.  It is actually a beautifully functioning dynamic when taken in a humble spirit.  It is not to be mocked or misrepresented.  If you share one of the umbrella illustrations....please share the correct one.