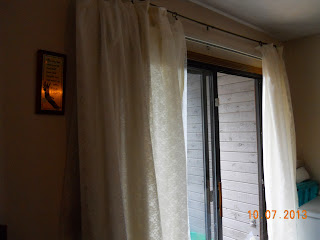 I had a weird idea I decided to try this year.  The patio doors in our apartment might as well not have doors at all.  They don't block a lot of air.  In the winter, wow, so cold!!!  The apartment has vertical blinds hung, which I really dislike.  They do nothing to help the cold issue.

So each year we have to hang something additional overtop of the blinds.  We also need to be able to move in and out of them.  Thus totally plastic-ing the door off isn't practical either.

Previously, we hung an old quilt up on a rod using those little rings with clips on them.  It worked, and looked "country cute" which both my husband and I were fine with.  However, the one major beef I had with it, is it let in no light.  Being that me and the children are home all day most days, I need to have some light as much as possible.

I also thought perhaps something a little more neutral would be better.  Heavy plastic usually blocks the most, but again, it wouldn't work.  I thought about clipping plastic up with the rings, so it could slide back and forth like a curtain but that'd be so ugly.

Then I had a bright idea to use that "lace" vinyl tablecloth by the yard that is sold at places like JoAnn's or Hobby Lobby.  If you use a coupon, it isn't bad at all.  I paid $3 per yard and needed 5 yards to do it.  I did also take an used flannel sheet to "back it" with as additional insulation.  So it has a layered effect.  The vinyl will block cold, and the flannel insulates a bit.  But both are cream colored and allows some light through.  They are neutral, and at a glance, they just look like normal lace curtains.  I am surprised at how much it looks like curtains actually.

They make some insulated thermal stuff I considered strongly.  It has the reflective mylar inside of it that would be awesome for winterizing the door.  But it is about $40 a yard, even after a coupon it would still cost probably a $100 to get enough yardage and would block all light.  It would also need an additional fabric overtop of it to make it look nice.    Most store bought premade thermals are simply not long enough.

My option may not be as "efficient", but I think it is going to work for us.  It won't block all of the cold air perfectly, but it allows us to use the door and should still greatly lower our electric bill.

I did end up using the sewing machine and zig zaging the vinyl and the flannel together at the top, folded over, but it wasn't totally necessary.  It just helped the layers lay better and it to look more the real curtains at the top. (wowsers was that a pain to sew too).  You don't absolutely have to do that to make it look decent and work though.  Thus this can totally be a no sew project.

Just passing on my odd idea for keeping out the cold.  I am sure it could be adapted to changed to suit many needs.